Teamwork is working together. This lecture was developed by Wei Zhang, my graduate student studying interdisciplinary teams. I later supplemented the lecture with content from Joana Wolfe’s “Team Writing: a guide to working in groups.”

User centered design process requires a mix of skills. So, modern software is developed by teams composed of members with diverse skills. These teams can be composed of:

These team members need to work together effectively for a successful project.

User centered design process typically has important stakeholders that are not part of the team, for example:

Although these stakeholder are not team members, they need to work effectively with core team for the project to be successful.

The stakeholder network for this course: 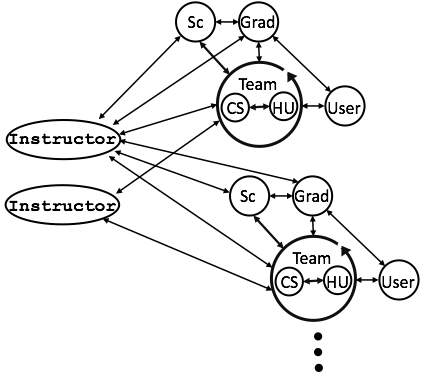 The core development team for this course is composed of CS and HU students. The CS students are backend developers and the HU are frontend developers. The core team must interact with:

Your team must work and communicate effectively with the other stakeholders for the project to be successful.

It is well know that stakeholders external to the team have difficulties communicating with the development team.

Wei has studied the dynamics inside teams and the conflicts within the team. Team conflicts can be categorized into:

In pass instances of the course, both CS and HU students complained and suggested:

Note all, both CS and HU students, suggested:

There are basically three methods for collaborating:

We all are familiar with the face-to-face collaboration associated with meetings. Because of the structure of programs and programming languages, computer scientists frequently collaborate by dividing the program into “classes” or “functions” and then team members code in isolation. Perhaps we are not very familiar with layered collaboration. Some examples are writing a document in which the author writes the initial draft and then the editor edits the document. A example in programming is a programmer writing the code and then a quality assurance person testing and debugging the code.

The three collaborations methods have different advantages and disadvantages.

Teams are not automatically form effectively. We need to focus on what teams can do to make them more effective.

What is a team? Scientists say that “teams are social entities with high task interdependency and shared common goals.” Note the terms:

For you, the shared goals or common purpose:

But teams also work together and share information. They need to coordinate themselves and cooperate as the project changes.

Some techniques for building effective teams:

We go into each of the categories in more detail.

Recognize that you have two goals. Project goals define exactly what you will accomplish during the project. But, you also have personal goals. These can be to get an “A”, to have a “comfortable workload” or to learn a new technology. Writing the team charter can help elicit team and team mates personal goals.  Writing together the team charter helps to solidify (make concrete) the teams share goals and personal teammate goals. Also, team members can reference it later when there are decisions are made.

In addition, if needed the team leader may

Team leaders have different styles, but the best team leaders are not “bossy.” They facilitate the team and work with the team.

Team leaders do not have to lead for the entire project. As the project changes, different team leaders can evolve as the appropriate leader.

Because our teams are composed of two sub-teams that are located in different classrooms, our teams should have two team leader. The HU sub-team leader is the product owner and the CS sub-team the technical leader. Besides monitoring separate component of the projects, the two team leaders can divide the work among themselves, for example the product owner can be responsible for communicating with the client and the technical leader can be responsible for scheduling tasks.

There are different team processes. I am sure that you have heard of the “Agile” process which is a team process. Generally team process depends on communication within the team and monitoring the progress of the project.

Some aspects of communication that you should use:

Chatting/Meeting Software: We could use discord, https://discordapp.com/, which as text and video chatting. Also there is Zoom, https://zoom.us/, for meeting with your scientists.

During meetings: Begin the meeting stating the goal for the meeting. This helps focus the meeting. Use a structure for your meeting so that everyone can contribute. Examples are “round table” or “voting.”

Roles for meetings/email can include:

Although the structure of this course helps to monitor progress, your team will need to do some of its own progress monitoring. This is especially true when you start implementing the app. Two major documents for monitoring progress:

There are three important team documents. The team charter is for initial organization of your team. The other two documents are associated with team meetings. The meeting agenda is written prior to meetings and the meeting minutes are written during the team meeting.

To allow team members to prepare for the meeting, the agenda should be emailed to the team prior to the meetings. The email should also give the time and location of the meeting.

Conducting meetings without an agenda runs the risk of a disorganized and ineffective meetings. Without a clear agenda there are risks:

Meeting minutes should be completed during the meeting and posted on the team website by 24 hours.

Meeting minutes is a historical document that gives a timeline of team decisions and the progress of the project. Without a meeting minutes there a danger:

The team should spend an hour during their first meeting to write a team charter. The team charter is a mechanism for members to get know each other in respect to the project and to organize the team. Writing a team charter provides an opportunity for the team to decide on it goals. Also individual team members can express their personal goals for the project and any constraints that they may have to work on the project. In addition writing the team charter, the team decides how it will organize itself and handle disputes.

A team team charter should consist of:

Do not list “getting an A on the project”, rather be more specific and  specify what you think is required to get an a A, for example “completing all the assignments on time.” Note that different team members can have different ideas how how to get an A. Talking about specific goals for the project allows these differences to be discovered and discussed.

The last goal probably will not have much support from the rest of the team. But if that is truly your goal it is best that it made clear upfront, so that the team can decide how to manage the situation and that you do not become a negative contributor.

Eliciting individual goals will help later, when the team decides how to distribute tasks.

Team members have other concerns that may effect their work on the project. These can vary from personal commitments that will make them unavailable during some of the development to concerns about skills and knowledge to perform tasks.

These concerns should be made clear to the rest of the team so that they can plan ahead and figure out how to deal with them. For example, if you are not available during the later half development, the team can give you more work during the first half of development. If the team know ahead of time that you will not be able to make some meetings that can keep you informed by email.

Team Governance: How to overcome differences

While designing and developing the app, the team will have many decisions to make. Not every decision will have agreement from all team members. There are several ways to overcome disagreement about decisions

There are advantages and disadvantages to each method of deciding

Member Expectations and Grounds for Dismissal

An important aspect to the contract is delineating expectation for members. These expectations can include:

To enforce these expectations, your team needs a procedural for dismissal of team members. A member dismissed from the team will not be able to pass the course, so dismissal is very serious and requires a well-defined process.

Outline of the team charter can be found in resources/TeamCharter.docx